So you want to learn the Palantype (pah-lahn-type) machine shorthand system, do you? Well, you’ve come to the right (and the only?) place on the Internet. My name is Ted, I’m a developer of Plover, the free open source stenography program. I’m stenoing this guide, not palantyping it. I can’t say that I know the system well, but I know enough to get you started. I also don’t know how much you know about chording systems or about Palantype itself. I’m going to start from the beginning, and try to be brief. The Palantype is a simple system, simpler than stenography. It’s main barrier of entry is the fact that you can’t find lessons online for free and you can’t get a good Palantype machine for anywhere near what a normal person might consider a “reasonable cost.” For that reason, Plover (the software that we’ll use to drive the Palantype logic) supports input from regular keyboards that support NKRO.

NKRO simply means that you can press N keys (anywhere from 1 to all the keys on the keyboard) at once and have them register correctly. This is important because while making chords on the Palantype layout, you’ll be using many keys and you need them all to get caught by Plover so that it can understand what you are writing. You can read more about the NKRO keyboards and where to get them on the Plover wiki.

The Palantype layout is split across your two hands. Here’s a picture from Palantype enthusiast Samuel Belli.

Notice how the layout tilts with the hands, and the columns are straight, not staggered, to be more ergonomic than a regular QWERTY keyboard.

Next, we’ll see what keys map to what in the Palantype layout. This next picture might raise some questions: 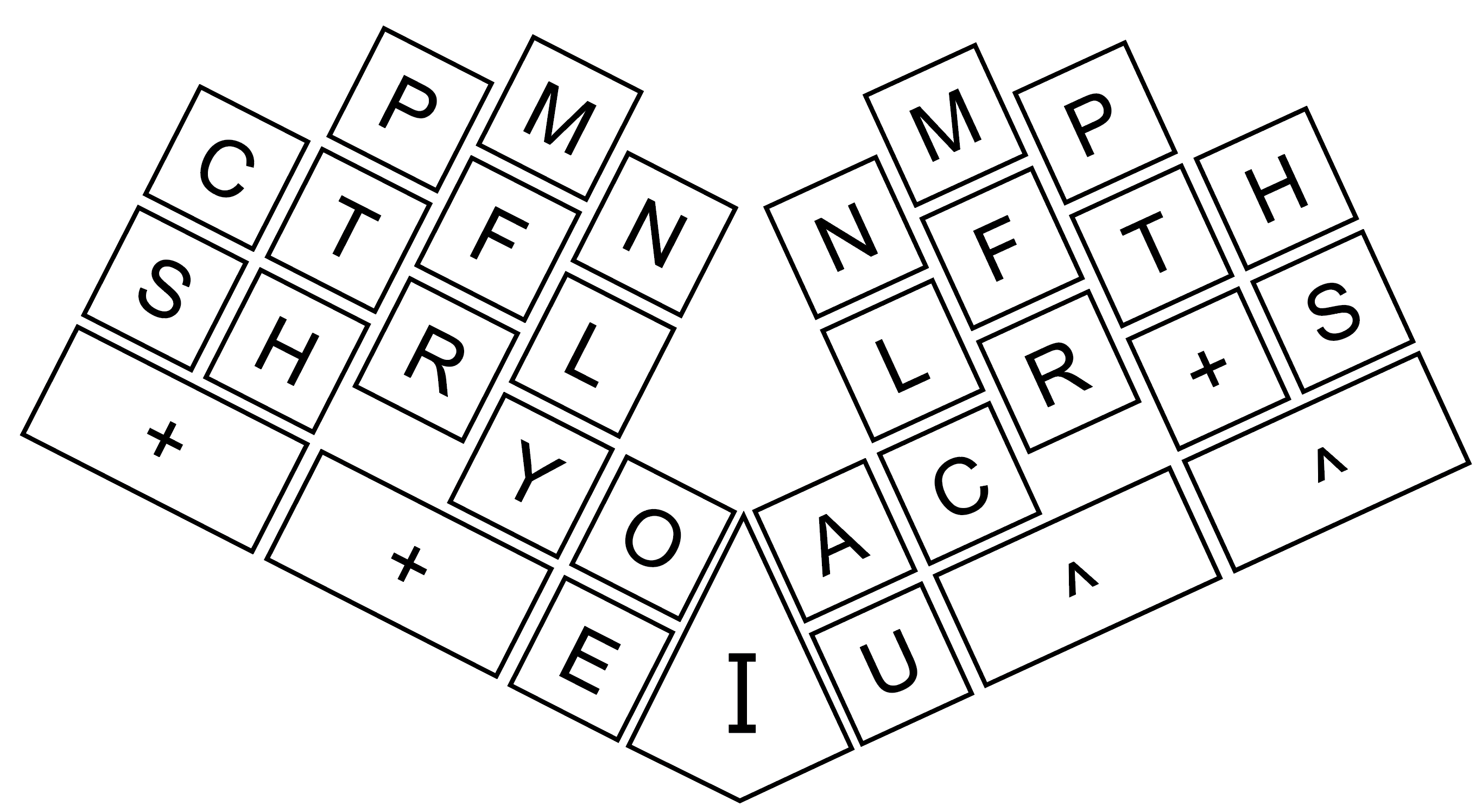 Notice that we have some duplicate keys in this layout. Notice, too, that all the vowels are in the center. This sort of layout may appear as strange, but it’s because the Palantype is going to make a syllable, or rather a sound, with each stroke. Essentially, there is an order to the keys. After the Palantypist hits all the keys and then lets go, those keys and their order form a sound. Depending on the sound, it may form a word or a part of a word which is then output into the computer.

For example, if the Palantypist hits both P keys and the O in the center, the resulting raw key representation is POP which then translates into the word “pop” on the computer. Now, consider that next the Palantypist hit L on the left hand, A in the center with their left thumb, and R with the right hand, now the resulting raw representation might be POP/LAR, which phonetically maps to “popular”. And then the output on the computer changes from “pop” to “popular”.

The home row of the Palantype is STFL E U LFTS 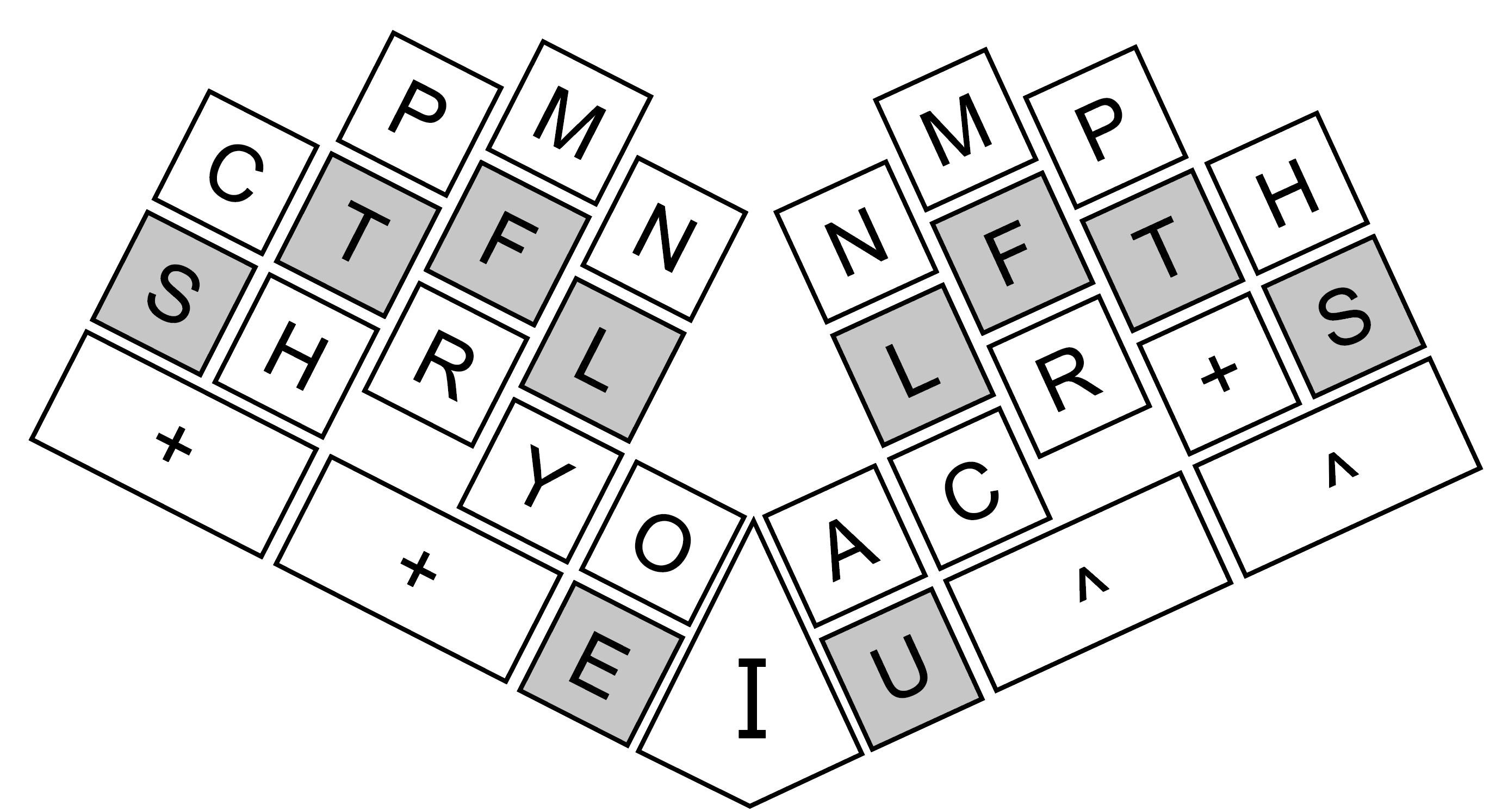 The full palan order is shown by the diagram below: 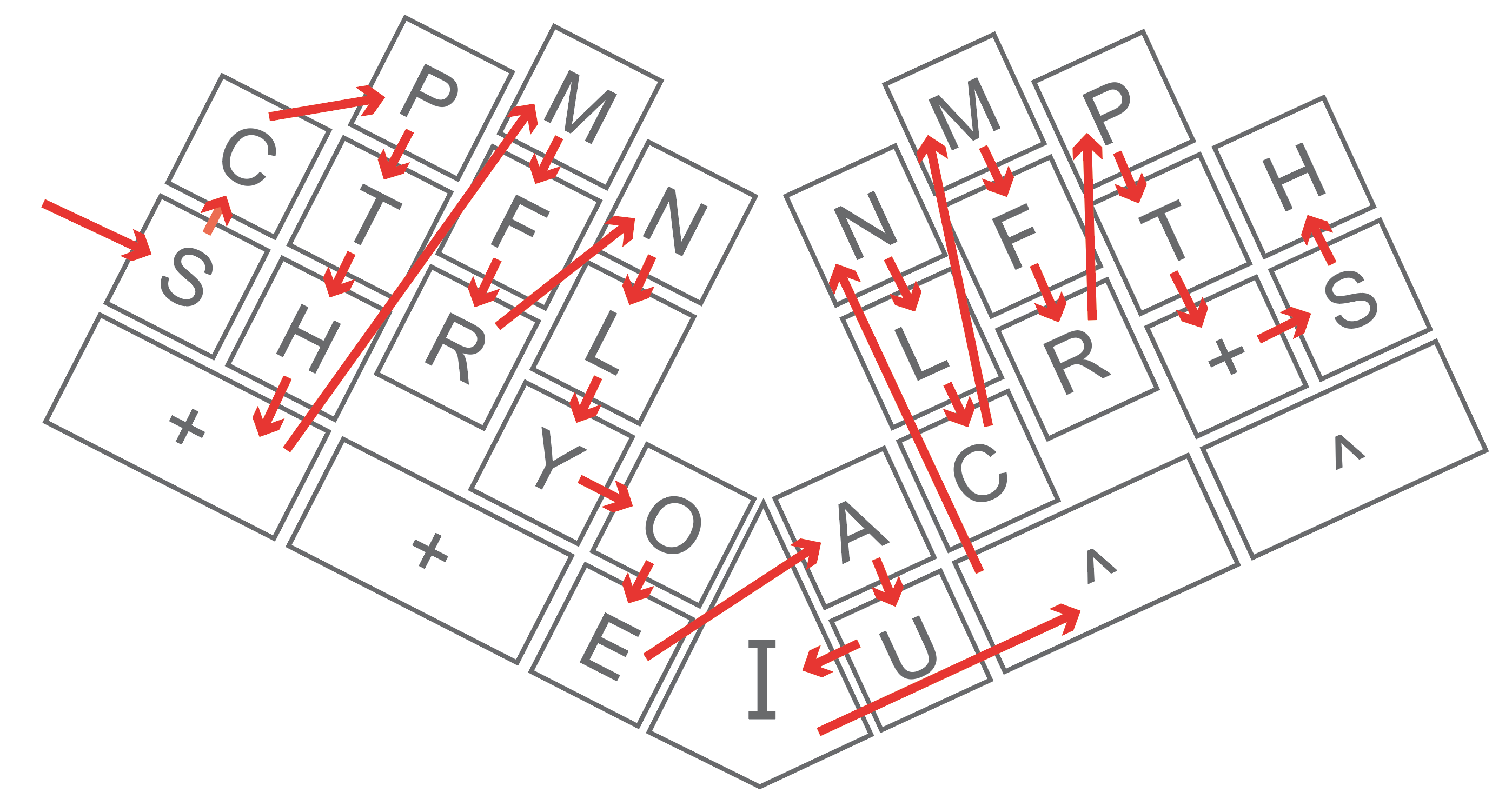 Note: the + and ^ keys don’t have a phonetic representation but their order in print is consistent.

All the strokes in raw format that you will see of the Palantype, or if you ever see a paper tape output, will be in palan order:

It’s important to know this order by heart and be comfortable with it. You can’t make a habit of breaking the order in your own strokes or you will end up with a confusing and unpredictable theory.

When representing the order in raw format in this website, we use two additional characters → - and /:

You may have noticed that there are missing keys on the layout above. You probably also saw the keys that aren’t letters. The + keys are called “cross” and the ^ keys are called “point”. They are used to give an alternate sound for whatever key you are pressing in each section.

If you are using Plover and don’t have a Palantype machine, you can still try out these exercises and get started with the theory and lessons. You just need a keyboard that has NKRO. Once you are set up, you can use the Palantype layout on your regular keyboard as demonstrated by this diagram:

The vowels are very versatile and some representations are used for phonetic sounds like “ee” and “aye”, while others are used for spelling like in “bear” as opposed to “bare”

*Using these keys is determined by the sound paired with the spelling of the word.